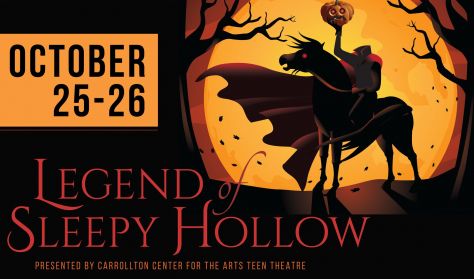 The story takes place in the late 1700s in a fictional city called “Sleepy Hollow” which is near Tarrytown, New York. A school teacher by the name of Ichabod Crane comes to town from Connecticut and finds himself at odds with a local by the name of Abraham “Brom Bones” Van Brunt over a woman named Katrina. Meanwhile, the ghost of a soldier who lost his head to a cannonball during the American Revolution haunts the area every night in search for his missing head. And should anyone interrupt the Headless Horseman on his quest to find his head, they are killed. One night, as Ichabod  was leaving a party at Katrina’s home, he finds himself face-to-face (so to speak) with the Horseman, what happens?  Come see our production and witness for yourself.  Directed by Cindi Winstead.